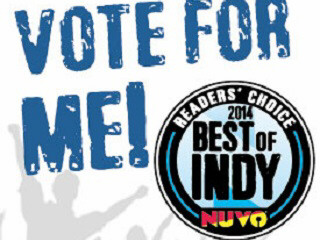 Honestly, I hadn't realized NUVO was such a polarizing force in the local music scene.  All this time, I thought it was just me.  Do a quick search of NUVO on Facebook or Twitter today, and you will see there are three types of posts flooding the net today:
Thinking about it, I kind of support all three of those stances.  In that spirit, for my obligatory "NUVO Best of Indy Post," I'm just going to say, "Hey, I got nominated twice. That's all I really wanted. Why don't we back WTTS and Matthew Socey and get them up to the top of the list this year?"  I will then dedicate the remainder of my 750 words to pointing several of my good friends who actually do stand a chance of winning, and whom I also think deserve your vote.  You probably weren't aware, that several nominated businesses and individuals in non-music categories have close ties to Indy In-Tune, and definitely deserve some love and support from members and fans of the local music scene.  For example:
Then there are some gray areas where I know everyone has their go-to favorites, but just in case you're on the fence, let me persuade you...

(* Note: I'm not going to tell you who to vote for in the music-related categories, and please don't ask me who I voted for.  I do this every year, and it's like being forced to pick my favorite child.)