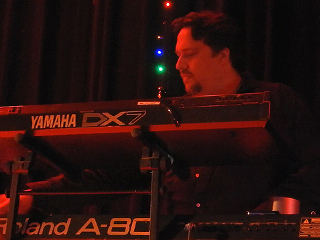 Can't take it anymore.  Hands beginning to shake.  For those of you who don't follow my personal Twitter feed, I'm in bit of a feud with Sprint at the moment.  Around about April 30, my cell phone signal went from "acceptable" to "no longer getting phone calls, texts, or Internet when indoors" (at work or at home).  I took the phone back to the Sprint store, since I have a warranty on it, but the store insists the phone is fine, and Indianapolis is just notorious for poor signal quality when you get out of the populated areas, and the phone I have has a very weak antenna.  So apparently, Castleton (200 yards from I-465) and my house (the Fisher's Burbs, 100 yards from SR-37) is the wilderness?!  Besides, I've been a customer for almost ten years, and I've NEVER had to go into my back yard to make a phone call before.  So if you're trying to get hold of me, you just have to hang on until I go outside for lunch, at which point a flood of texts and voicemails from the previous four hours will arrive on my phone all at once. (This despite the fact that, according to the Sprint Store guy, "You really don't have to have any bars to be able to place or receive phone calls."  It must be a coincidence that everyone calls and texts at once the minute I hit the parking lot.) Meanwhile, unable to stream musical goodness, I'm sitting here listening to an old MP3 player (like some sort of caveman), waiting for somebody at the Sprint Store, Sprint Corporate, or @Sprintcare (who really don't) to believe me.

I'm getting grumpier.  Not to mention, I'm starting to abuse my blogging powers by loosely tying in my customer service woes to music.  Sorry about that.  Please, take this opportunity in the comments to tell me how wonderful your cell phone service is and how I'm a loser for being a Sprint customer since 2001.  I love these conversations.  What?  No, I always jam a fork into my leg when people talk to me about their brand loyalty to their cell phone provider ... I find it relaxes me.

As long as I'm abusing the blog for my own personal gain, may I also take these last few words to remind everyone of a great show coming up at Birdy's one week from tonight.  Our good friends in Whoa!Tiger are having their EP download party, and have most generously allowed my own humble band, The Mess, to play our first official gig and open up the evening.  I believe the idea is we absolutely won't be a threat to them.  We've only had three rehearsals as a full band, and we will, in fact, be doing an all original set, including a couple of tracks that we've never played together.  Now, granted, we've got a combined 150 years of music experience between us, and the songs aren't exactly virtuoso prog or anything, but considering I'm never really comfortable on stage to begin with, this really makes me edgy.

Also on the bill, and rounding out our "All-40-something-suburban-backyard-barbecue-heartland-rockers" theme for the evening, are The Failers, another local favorite go-to band of mine you may remember from PodConcert VI and the High-5 Radiothon.  In fact, they've even graciously allowed us to borrow their bassist, Chad Dressler, as our tubthumper is unfortunately out of the country.  You know, because there just weren't enough unknowns in the mix for this show.

Now, those of you who don't know me, may also be surprised to know that, while I am perfectly fine talking on mic to 150 people I can't see, I can't MC a live show for 30 people who aren't even paying attention to me without my voice wavering.  Playing keyboards in front of 20 friends?  I usually get the shakes until the scotch kicks in around the bottom half of the set, at which point I start playing really sloppy, but I don't care.  You thought I insisted on playing from a stool because I wanted to be cool like Greg Allman?  No, truth is, I'm afraid of my knees buckling.

For some reason I'm not overly nervous about this gig, even though it will probably be much better attended by more prominent musicians than my last one (three years ago).  Therefore, I won't actively DISCOURAGE anyone from coming, as I used to with my previous band.  I'll just say, hey, we go on first, but if you want to go out to eat or something, that's cool.