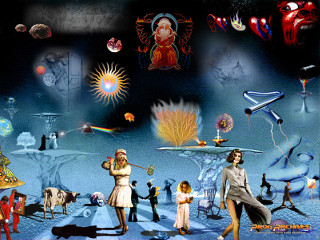 Unless you live in a cave, or under a rock somewhere (or maybe you're lucky and you don't actually pay any attention to anything I say), you are probably painfully aware that I am what most people would term "one of those nerdy prog snobs." It's not like I don't know this. It's not that I keep it a secret or anything, I just understand that most people are convinced all prog songs are boring 20-minute, magnum opuses about fairies riding in spaceships to mythical realms where they talk to strange energy beings ... and really, I don't have time to dispel these misconceptions ... but seriously, there are also prog songs about robots.

For those of you who don't "get it," the simplest way to explain "prog rock" is that it is "rock," but rather than being derived from the structures of blues music, it instead employs a compositional style based on a different form -- usually jazz or classical, but there are also Asian-influenced, African-influenced, and avant-garde sonic art influenced bands.

For the purposes of this (first) prog mix tape, I'll focus on my personal favorites from the more-accessible end of my listening spectrum, but hey, if you ever want to nerd out on some crazy-assed music, certainly hit me up and we can talk shop.

Kings Crimson -- Lark's Tongues in Aspic I'll spare you the various long history of the multiple, completely different iterations of the band, and just go with the all-important "Discipline lineup's" version of the song.

Genesis -- The Musical Box Back before Sledgehammer, Mike and the Mechanics, Invisible Touch, She's and Easy Lover, and ... er GTR ... Peter Gabriel was a bit edgy/creepy and Phill Collins was a badass drummer.

Kansas -- Song for America Not a band that a classic rock radio fan would consider prog, and not a place one would consider to be a hotbed of prog bands, but yeah, if you discount the hits and listen to the album cuts? Definitely, prog.

Emerson, Lake, and Palmer -- Knife Edge I would hesitate to say that Keith Emerson wanted to do for keyboards what Jimi Hendrix did for guitar, but there was a rumor that Hendrix was such a fan that he almost joined this band one.

Kate Bush -- Get Out of My House I really think Kate transcended prog and pretty much eventually went on to just make "Kate Bush music," but this, for me, was where she first got interesting.

Mahavishnu Orchestra -- Meeting of the Spirits Some are going to cry "fusion" on this, but I'm going to maintain, despite the lineup, this is closer to King Crimson than it is Bitches Brew.

Niacin -- Blood, Sweat, and Beers This band is so stuipidly good, it bugs me that all the videos of them are from the same concert.

Spock's Beard -- Hiding Out ... and why can I find far too many bad fan copies of this one, but no good produced versions?

Yes -- Heart of the Sunrise Cause, you know, I had to.