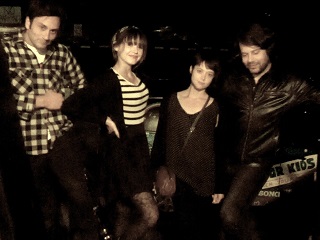 If you have never heard Gringo Star's music, the best way I can think to describe it would be....psychedelic indie 50's/60's garage surf punk rockabillyish experimental doo wop.  If that doesn't make sense now, it will after you hear the Atlanta band's self-recorded, self-produced album, Floating out to See.

The best and most beautifully accurate quote about the band's third album:  "liquid melodies cascade through air like a waterfall in zero gravity, brothers Nicholas and Peter Furgiuele and cohort Chris Kaufmann out-of-bodyfloating apparitions of a band glancing down as their corporeal manifestations radiate celestial blues and psychedelic garage bangers, gritty R&B shuffles and spaghetti-Western weirdness. Floating Out to See couldand shouldbe the soundtrack to Tarantino's first sci-fi film."  And it's interesting, because before I read that quote, I thought while listening to the album, "I could totally hear several of these tracks in a Tarantino movie."

This is one of those special, rare albums where every single song is great.  Most albums have at least a song or 2 that you'll tend to skip, if you're listening to it in the car, or wherever.  Floating out to See is a no-skipper.  If I had to pick some favorites they would be "Taller," "Peephole," "Satisfy My Mind" and "Lovesick," which sort of sounds like a song you'd hear at a 1950's school dance, meets a  "Sleepwalk" by Santo & Johnny vibe.  The track "Going Way Out" makes me feel like I'm at some sort of psychedelic beach party in the summer time, in California.  In 1967. "Taller" has sort of a bluesy, rockabilly type sound, and parts of "Look for More" sounds like it could be in a Western...but a really weird Western.  The album is rather diverse, but goes so perfectly together.

If you start listening to it on repeat right NOW, you'll know all of the words and be able to look cool and sing along when Gringo Star visits Indy to play at Hi-Fi along with The Icks on June 3rd!   This is a can't-miss show and if I were any more excited about it, it would cause health risks.

Gringo Star was kind enough to chat with us recently about their album, baseball, obscure records and other fun stuff.

Indy In-Tune: Hello Gringo Star! Thanks for talking with us, even though you are huge rock stars now, covered by the likes of Rolling Stone and Pitchforkthat's kind of a big deal. I appreciate you slummin' it with us. Your third and most recent album, Floating out to Seehow was the making of this album different from the previous two, and talk a little bit about the advantages or disadvantages of doing it on your own as opposed to with outside engineers and producers.
Nick Furgiuele: Thanks! We loved doing it this way. On the first two gringo albums, we worked with a producer/engineer at a bigger studio, but we really preferred doing it in the confines of our own studio this time around. We got to spend a lot more time fine-tuning everything and experimenting with different sounds and parts and arrangements. Not to mention, we didn't feel the pressure of "we only have one week in here to get all these tracks down," and it was way more laid back. It was nice to not have any other filter besides just Pete and myself. It was all us all the way.
Indy In-Tune: What made you decide to do it this way this time around? Do you think you'll continue that route or do you want to work with other engineers and producers in the future? Any specific ones that you haven't worked with but would like to?
NF: We'll prolly be doing this for now. We've already finished up a new 7-inch that we did in our studio, and we're also laying down tracks for our new album there.
Indy In-Tune: When you write songs, are you generally on the same page and it just clicks or is there a lot of compromise necessary?  What's the division of work like, as indoes someone write most of the lyrics, and someone else writes all of the guitar, etc.?
NF: We both write separately and together. Usually whoever is singing wrote the song/lyrics, but we do collaborate on stuff, too.
Indy In-Tune: Do you have a favorite track/tracks off of this album? I love all of them, but I think if I had to narrow it down, my 3 favs are Taller, Satisfy my Mind and Peephole.
NF: Awesome! Yeah, I'd say my top ones are "Going Way Out" and "100 Miles." I really liked how they turned out.
Indy In-Tune: What's up with cover art? It sort of looks like a photo taken at a fancy dinner for like, Winston Churchill or The Queen or something.
NF: Haha, yeah, I don't know who they are. At the house where we all used to live, our old roommate found this giant picture in someone's trash, and it's been hanging on the kitchen wall for a while. I basically took a picture of it, printed it out and my girl, Jules Vern (from the awesome band Shantih Shantih), did a water color on top of the black and white. 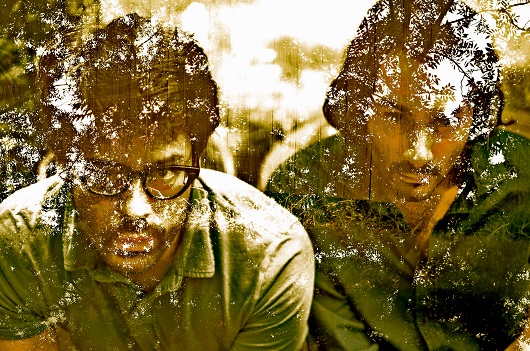 Indy In-Tune: The first track, In the Heat, has some sample of some man talkingwho is that and what is he talking about?
NF: It's this guy in our neighborhood. He's talking about Atlanta.

Indy In-Tune: Surely you didn't just start out playing this weird surf rock psychedelic doo-wop trip-pophow did you get to this sound; what's been your sort of musical journey?  (For example: Well, I started off with Beatles covers and then ended up being in a hardcore punk rock band before I ultimately found my true calling as bluegrass hip hop band kinda thing )
NF: Pete and I have been writing songs together since elementary school, and have always been heavily influenced by early rock & roll like Ritchie Valens, Buddy Holly, Sam Cooke, Link Wray, doo-wop and stuff. We were definitely brought up listening to this stuff 'cause that's what our parents were into, and that's what we got into. Our grandad was a DJ back in the '40s-'60s and championed a lot of old soul, gospel and rock & roll, and put on a lot of shows, and had record shops. So we grew up hearing about Jackie Wilson and Sam Cooke shows that he put on, and Little Richard, Otis Redding and James Brown. Our journey began there.
Indy In-Tune: You guys play a lot of shows.you have 14 shows in the 18 days surrounding your show here in Indy. Where does touring and playing live shows rate in your list of music-related obligations? Some bands are much more about the studio and the writing/creating than they are playing live, and vice versa.
NF: We love both, but definitely love to travel and play music. There's nothing quite like the adventure of being out on the road. It's more in-the-moment... experiencing life and culture firsthand. You can't trade it for anything.
Indy In-Tune: Where/when was your first ever live performance as Gringo Star and how did it turn out?
NF: Well, Pete and I played shows in our other bands growing up. One of our first shows was at an 8th-grade dance. But the first proper Gringo Star shows were actually in the U.K. in 2007.  I think we played in Newcastle or Nottingham. We got invited to open a U.K. tour for a St. Louis band we were friends with. It was so much fun to tour internationally for the first time. Very exciting. 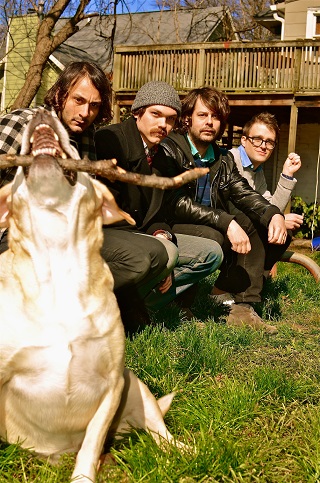 Indy In-Tune: You've played some of the big fancy festivals like SXSW and the like; how is that for you compared to the more intimate venues, and what kind have reception have you been receiving at some of these festivals?
NF: It's all good. I really like the outdoor festivals, but we like it allclubs, big, small, outdoors, indoors, houses, schools, neighborhoods, roofs, bowling alleys, streets, parties. We've played a lot of different places.
Indy In-Tune: Where is somewhere you have not played but really want to? It could be a venue or a city, country, etc.
NF: Mexico and South America. We played Juarez once a while ago, but it'd be great to do a full tour down there.
Indy In-Tune: What is the strangest lineup combination of a show you've played? Something like opening up for a feminist Nazi punk band, or some weird group you've either opened for or that has opened for you, sometime during your musical journey. It could be 14 years ago or it could be last week
NF: We once played a Dennis Kucinich rally at Georgia Tech when he was running for president.

Indy In-Tune: Gringo Star doesn't sound like any one band I've ever heard before, but I can hear these droplets of potential influence from psychedelic '60s garage to doo-wop to British Invasion to Indie rock to rockabilly/blues meets Pixies meets Buddy Holly meets Strawberry Alarm Clock meets The Kinks meets Santo & Johnny meets The Yardbirds.  Where does this come from?!
NF: It comes from the heart of a couple of gringo brothers.

Indy In-Tune: What are some bands right now who you're digging?  Either new bands, or bands that are new to you

NF: Shantih Shantih is an amazing new band from Atlanta. Fuzzed out desert psych. They just put out their first 7-inch. It's really good.
Indy In-Tune: Your label is called My Anxious Mouth.  Why?  And, are there any other artists on the label yet?
NF: That's what we named our publishing company back in the day, after one of our old songs, and we just used that when we decided to release music ourselves. The label, so far, has only released Gringo Star stuff.
Indy In-Tune: What is something that might surprise someone to see in your music collection?  Either a guilty pleasure or just something really obscure, etc.
NF: I have these obscure records from the '50s, that are basically just a sample of different radio stations from around the country. They're like 30 minutes and have songs, old commercials and stuff. Pretty cool. DJs had so much more character back then!
Indy In-Tune: Do you guys have any interesting, strange, cool hobbies outside of music? Like archery or stamp collecting or big game hunting?  Haha.
NF: We play a lot of baseball. We started a loose pickup league called ATL Sandlot Renegades with some friends a few years back.... usually have 25 or so games a year 9 innings of hardball. Wooden bats only.
Indy In-Tune: What's on the horizon for Gringo Star? Where do you want to take things, or what is the next level you want to achieve or milestone?
NF: We're releasing a new 7-inch in late summer. And we're excited to do a full U.S. tour around that. In the meantime, we're finishing up our new album that we hope to have out early next year.
Indy In-Tune: For those who have not yet had the good fortune to witness the Gringo Star live experience, what can we expect to see from your show at the Hi-Fi on June 3?
NF: Rock & roll and sweat.
Website: http://www.gringostar.net
Facebook: https://www.facebook.com/gringostarmusic
Twitter: https://twitter.com/Gringo_Star_Atl
YouTube: https://www.youtube.com/user/gringostar01
iTunes: https://itunes.apple.com/us/artist/gringo-star/id297289222
Purchase tickets: http://www.ticketfly.com/purchase/event/566779
See you at 8:30 on June 3rd at Hi-Fi in the Murphy Arts Center on Virginia Ave.