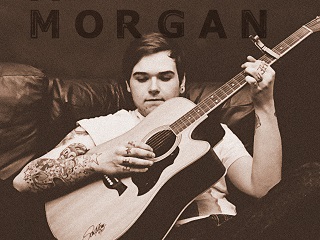 So this is one of those unfortunate parts of being me: I'm sitting in a bar on Monday Night, drinking a couple of beers, and waiting for Monday Night Football to start. No, that's the good part, the unfortunate part is coming up, so calm down. Anyway, I'm scrolling through Facebook, minding my own business, and I come upon a post by one of my musical heroes, Simon Saynor. I've spoken of him before. He's sort of a funnier, more-famous, British version of me with the whole "knows every local band and plays them on the radio" shtick. Anyway, he's plugging the Kickstarter campaign for a local musician friend of his named Bam Morgan, trying to get people to chip in so the guy can get his first EP made

So, yeah, I gave him a few bucks  er  pounds -- since he only had like three backers, and an unfortunate name like "Bam." Though, in fairness, the song he played in his video was really good, so it was worth the price of a coffee and lunch. Actually, now that I think about it, I'm assuming after they convert that the amount is pretty equivalent. It would suck if five bucks American (which converts to about 3 pounds) doesn't even buy a pack of gum. I'll probably have to ask someone over there about that.

Anyway, feeling good about myself about fifteen minutes later, it dawned on me: I need to make all of you people feel this joy. It is Christmas after all. Why not get in the spirit, foster a bit of good will, and maybe help score some reputation and awareness points for the Indianapolis music scene as a whole?

I have therefore decided that for the next five days, possibly longer if I'm really enjoying it, I will be donating that day's would-be coffee and lunch money to a different artist's Kickstarter campaign. The artist will be from outside Indiana, one that I have not heard of before, and one whose music I think is deserving of a couple bucks of support from me. The key to this whole thing is, if it comes up, I tell the artist that the donation is part of Indy In-Tune's challenge to the rest of the Indianapolis Music Scene to say "Hi," to the struggling artists of the world with random acts of kindness to strangers.

If you like the idea, I cordially invite you to try it yourself. Share the pic below (or make one up of your own if you don't like my Photoshop abilities), then hit the crowdfunding sites! Be sure and fire back a Facebook post, a tweet, or a message below in the comments letting us know who you supported and why. I love finding new music. 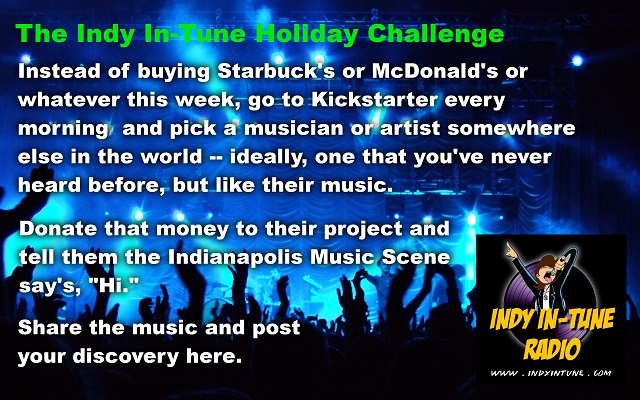