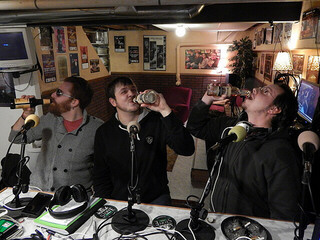 ^%$#@!-ing hangover!  Okay, raise your hand if you didn't see that coming.  In retrospect, it's probably a good thing that Dell Zell cancelled last minute.  Well, that and I teased Irish about not counting Dell Zell in until you actually see them in the building.  I mean, killer band, super great guys, but they've never once showed up for recording.  They either disappear, or something comes up, unfortunately as it did yesterday.  Lucky for us, Jeff Byrd was able to stay late, Cody and Ben from Audiodacity elected to show up early (and Jason showed up late ... also a habit), so we got a couple hours of live disc jockeying in.  Took a call from the audience (didn't even know I had one, to be honest) and had a minior revival of the John Stockton Project.  God, I miss that band.

It's heartwarming to see comments and tweets from people who are listening, many of whom are friends of friends that I vaguely know, and wasn't even aware they knew about Indy In-Tune, but it's very cool that they pay attention and even participate.  You could actually see the power of social media at work.  Each interaction that got retweeted or responded to seemed to almost double the number of listeners within about ten minutes.  At our peak, we came without about three listeners of breaking the record, which on a Saturday afternoon, normally one of the lowest points in the ratings, was pretty amazing. (Saturday late night is actually the worst, as the majority of our listeners are musicians, or friends of musicians who understandably have other things to do on Saturday night.)  We might have to try this regularly on weekend afternoons.  Maybe we'll even plan something out in advance!

We did get a great interview and set in from Mr. Byrd, who I still say is terribly underrated and needs more people to invite him to be on their bill.  Audiodacity did an interview, in their own unique style.  Both turned out to be a blast.  We followed it up by crashing and closing down the Roller Derby Girl's Year End Party.  The rest of the night is somewhat hazy, but I got home about 4 AM.  It's now 8:30 AM, if that tells you anything about what kind of shape I'm in.

Taking the little one out to Shine at the Castleton Grill tonight to see Megan Hopkins and Dave Vogt.  Basically it's an excuse for her to practice her interpretive dance moves and eat ice cream.  Hope to see some of you out there.  Bring the whole family.  This is one of those rare events where you can do that you know.  Dave and Megan will no doubt bring their kids as well, so it should be a festive evening, despite the fact that it's balls freezing outside.  I, personally, don't mind winter at all, it's just that I'm old, and my testicles just can't take it anymore.