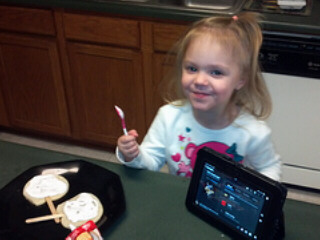 Ah, Tuesday.  Nice stressful day at the old day job, which is okay, normally there are definitely worse jobs out there.  Working on a big proposal which requires some really big document to get written in the next 8 hours.  I'd have finished it up last night, but Lil' Q insisted on baking cookies and listening to Indy In-Tune radio. Seriously, she's a voracious consumer of local music at 3 1/2 who loves her Aunt Jenn [Cristy], Uncle Timmy [Spainhower] and "Mr. Kolo."  Though her favorite band ... the one that really gets her butt wiggling ... the one that makes her giggle and dance around like a fool: Shadyside Allstars.  I am soooo doomed when she gets older, right?

So, after that fun evening of eating raw cookie dough and icing right out of the tube, I pulled a rather later night than I expected working after the wee one went to bed, and now I'm getting ready to head back to the office to polish that sucker off.  Fortunately these kinds of "analyst emergencies" are very few and far between, although I really feel you people are slacking for not arriving at this blog, podcast, radio station, event organization, and web site in sufficient mass so that I still have to go to a day job and can't dedicate my every waking moment to making local musicians famous.  Come on, what's wrong with you people?!

Kidding.  I just heard a similar argument from one of my peers the other day and thought I might roll my eyes in prose.

Tonight:  Ryan Brewer ... or Ryan M. Brewer ... I have trouble telling them apart ... his the penultimate Shine: In the Village at Sabbatical.  (No, there's nothing sinister, officially, about that.  The series was only contracted through Christmas from the beginning.)  Ryan is a supremely cool guy with the soul of a poet who plays a brand of singer/songwriter music that is an esoteric step above the usual fare. Come enjoy his sardonic view of life, love, and all that stuff in between.  He's followed by Kolo Bell's ever-expanding open mic empire, which seems to grow more and more popular each week.