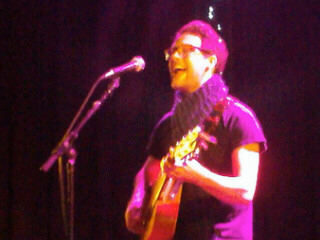 Cool happenstance last night.  Tweeted one of my favorite Ryan M. Brewer lyrics from the show...

Innocence is like money in the dryer.
You weren't aware you had any of it prior.
Then you lose it; so now it's gone.
Tell me, how much are you out?

At least two people caught the reference and a third asked about it and vowed to check Ryan out today.  Okay, so maybe in my own circle it isn't so unusual for someone to know the lyrics to a local artist's music, but on the other hand, I'd like to think I'm somewhat responsible for the fact that these people know who Ryan Brewer is and have heard his music.  No?  Well, maybe not.  I'm not sure.  I just said I'd like to think that.  Shut up!  At least I know I'm responsible for one of them.

For those of you too cool to follow my personal Facebook page, in other news, I read yesterday that the Hostelter compound is up for sale again, this time for a slashed price of only $1.3 mil for 55,000 square feet.  It's actually in a great location, within the loop, easily accessible from the interstate, not far from Broad Ripple.  Honestly, despite the fact that you'd spend almost that much in Lysol fumigating the place, and half again as much getting all of the tacky dolphin statuary, fountains, and chainsaw grizzly bears removed from the yard, this is a real bargain: 50 rooms, five separate houses joined together, ample parking.  I'm thinking ten of us should take out 130,000 mortgages and split the place into ten, 5500 sq ft homes.  Of course if I win the lottery tonight, that place becomes a recording studio, radio offices, concert venue, and musicians hospice by the end of the year, rest assured.  The only real downsides I see are 1) no railings on any of the many balconies; 2) marble floors at the bottom of that short drop; and 3) a place so big that squatters could camp out in one of the wings and you'd probably never know about it.  Still, I'll take the risk. 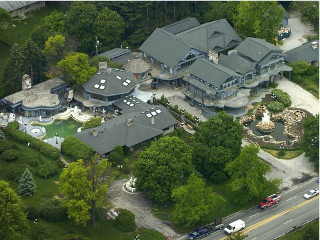 Short blog today, sorry.  Up late again last night, this time because I was too tired to sleep.  However, yes, I did get that proposal finished and out the door on time, thank you for asking, that was very considerate of you to worry about my well-being that way.  No, I don't think I'm getting a little loopy and punchy from lack of sleep.  No, I'm not talking to myself, I'm typing to myself.  Anyway, plan is to catch a few Z's at Claude and Annie's open mic tonight.  Should be a killer evening.  I'm thinking big plate of chicken wings, couple beers, and I'll just curl up in the booth in the corner about the time Ben Myers goes on.  Hope to see some of you guys out there.