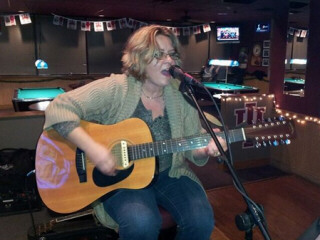 Kolo Bell's open mic tonight, as is standard operating procedure every Wednesday night.  Great time as always hanging out with the usual crew, despite some dalliances into "heavy topics" and the end that I just have to avoid any time they come up.  Thoroughly enjoyable performance this evening from Danielle Clashman, who shows up once a month or so and wows the crowd with what she's been working on.  Reminded me that I have a performance of hers she did for us as part of Monday Night Live #7, I promise to get that out soon, assuming it's not on the "lost hard drive" (Tangent: Fuck Western Digital).  The world really needs to hear this girl.

Got in an interesting conversation with Brandon Cannon, as usually happens when we drink.  New years is coming up, so it's probably about time to start planning what the big initiative next year is going to be.  He's got some really cool plans for Shine that I think will be great.  I have slightly loftier plans, which I never seem to move on.  There's always the pipe dream of the "Indy Overseas" European band exchange.  I have the bands and venues lined up, or at least lining them up is trivial compared to the $50K it will take to fund the idea.  There's a fledgling idea for a corporate version of Indy In-Tune Radio to bring local music to local businesses and put muzac/ASCAP out of business.  That one is easily doable anyway.  There's the coffee table book of Indianapolis Music I've been talking about for five years now, not to mention the novel I've been formulating for the past couple of years.  Oh, and I really think I need an old-fashioned "radio stunt" to draw attention to what we're trying to do here.  Maybe something as simple as a marathon broadcast for chartity, or maybe something extreme like broadcasting from on top of a telephone pole in my underwear in the dead of winter.  Who knows?  So many crazy new ideas for injecting a little life and attention into the music scene, but usually it's the drunken spur of the moment ones, like starting a local music radio station, that I end up just winging for fun, even though they're slightly more complex than the one's I've got pages of notes on.

I could probably even pull of more than one of those hair-brianed schemes if anybody wants to collaborate on one of them, or maybe someone out there has a new idea that I haven't even considered yet.  I'm willing to entertain suggestions here.  Hit me up.  I don't want to sit around freezing my ass off in January being completely bored, do I?  I'm willing to try just about anything as long as it's legal and hasn't been tried before.  What are your thoughts?