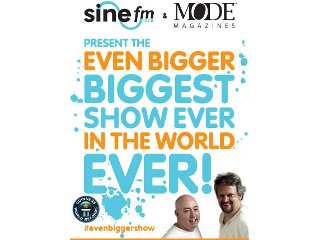 "Gutted" was the phrase Mark Kelley used, and somehow I too feel a measure of personal loss at this.  Apparently a DJ team out of India has set the new world record for longest radio broadcast at just over 84 hours, taking the honor from our friends Mark and Simon at SineFM.  You may remember how excited I was last Spring that one of my favorite stations was making the attempt.  In fact I not only listened to at least 75% of that broadcast, but also took it upon myself keep them alert through the overnight hours, which was no big deal since those are really just my prime-time bar-drinking hours here anyway.  Now I find out that less than a year later they are stripped of the title by what ammounts to mere moments!?  Rage.  I mean, I'm sure the new record holders are terribly nice people and all, but dose are muh boyz dey's messin wif now!  By Grapthar's hammer, they shall be avenged!

Okay, so remember yesterday when I said I wanted to do an old-fashioned radio stunt next year to raise awareness of Indy In-Tune?  Yeah, that's right.  I just found my New Year's resolution.  Just a couple of logistical points:  1) Does streaming radio count, or do we need to buy an 85-90 hour weekend slot on WITT or one of the low-watt school stations to simulcast the stream in order to make it official? Not a big deal, I could probably fund that myself or do a quick Kickstarter. 2) What is the optimal location to set up that would most benefit locally owned businesses and/or the local music scene?  Need ideas here.  From what I know, adrenaline is critical, and being in unfamiliar surroundings can only help keep alertness up.  Something comfortable, centrally located, and accessible to food and amenities would be ideal.  Preferably a publicly exposed, locally owned business that could benefit from extra foot traffic.  3) How do we harden the setup knowing that one line drop or buffer under-run in the stream could cost us the whole effort?  I mean, if I collapse form exhaustion or go insane, that's one thing.  If Comcast hiccups and resets a router (as they are apt to do), that's a whole 'nuther issue entirely.  And, of course, 4) Who does it?  Obviously I have to be involved for my own selfish reasons anyway.  Jack Barkley was first to speak eight months ago.  Brandon Cannon has already said he's all about it.  Irish, of course has so much unbridled energy that he could do two 85 hour marathons back to back.  And then I suppose one should send an invitation to Simon to reclaim his throne (Mark has already said he won't do it, and SineFM wouldn't let them if he did).  Besides SiFest was already a done deal just to get him over here for a night on the town, Indy-style anyway.  May as well put him to work too.