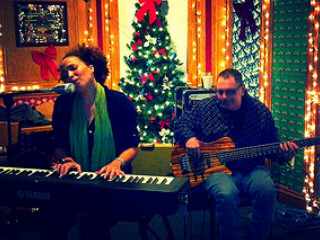 So, somewhere back in the temporary euphoria of everyone rallying to set a Guinness World Record the other day, I completely forgot to mention a great performance at Shine on the Rocks from the always astounding Jenn Cristy and greatly under-appreciated Al Paurazas.  Had an interesting conversation about Jenn's new record label and the general frustration of putting one's career in the hands of other people who either don't know what to do, or worse, completely take advantage of the situation.  Jenn's been in both of these situations across a couple of different labels (major and indie).  We half-jokingly said we should start our own label and just sign a bunch of our favorite artists because, while we fully admit we don't know what we're doing, we could hardly do worse than EMI did for her, right?  I even offered up "Jenndy In-Tune" as a possible name, though in keeping with the "publicity stunt" conversation we were having pretty much simultaneously, we decided that Jenn would have to bite the head off of a penguin (doves and bats are done).  Now, it would be one of the littler ones, not like an Emperor or anything ... those really don't have much of a neck to speak of anyway.  I'm thinking more like a Galapagos or Humboldt.

Satisfied my need to code, and to close out another card on the Springboard by throwing some search and filter capabilities on the blog archive page.  Hopefully this will help you guys sift through the garbage (like these "From the Console" things) and find the good stuff.  I should take the time here to publicly shame Brandon Cannon, Amy Foxworthy, Connie Cohen, and all those other people who said they'd be writing blogs and articles and such for this corner of the website, but have been slacking for the past month or so in getting anything done.  To that end, I'll once again offer up that there is a posting form if anybody wants to take their hand at being an ace music writer.  If the form gives you any grief, you can also email them to "submissions - at - indyintune - dot - com."  Next feature to add I believe are the callouts for the local scene page.  There's a ton of good content in there, but you can't get to some of it because the main page is dead/blank.  I've got some ideas, maybe I can get them worked up tomorrow.

Spent last night pretty much snowed in at Claude and Annies for something like 10 hours.  Really wanted to get out to the Rock House, but the weather and my car are too unpredictable for a 75-80 mile drive.  Endured an entire evening of Karaoke.  Sorry, I still don't get it.  Mel is great as always, and there were a couple that were reasonably solid, but I just don't understand the ones that need to have the words in front of them, and they still get lost while singing.  I mean, you guys HAVE heard the song before, right?  Otherwise, why did you pick it?  My biggest disappointment was that the guy at the bar with the Vanilla Ice haircut -- seriously ... complete with the stripes shaved into his sideburns -- didn't get up and sing.