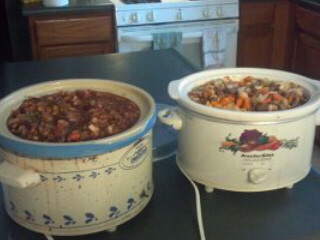 I really hate all this crappy weather. This has been my first music-free weekend in at least a year.  I've become irritable, and my hands are shaking.  I've taken to cooking, despite the fact that I almost never eat at home.  I just enjoy cooking.  Made three huge crock pots of food yesterday, chili, stew, stroganoff, and thinking I'll make a big ol' curry and a couple dozen sugar cookies tonight.  Er ... there is no casual relationship between those last two items.

Was pleased to see that friends Square Social Circle and Minute Details have successfully completed their kickstarter campaign, in fact they darned near doubled their modest goal of $800 bucks, and rightly so being two of the nicest bands in town.  Really looking forward to getting my hands on that.  Also thrilled that this is my fourth or fifth kickstarer that I've jumped on, (I would have jumped on about five more except that some of you keep doing yours on months when I'm in dire financial straits) and I have yet to see one related to local music fail to hit its mark, which gives me hope, or at least confidence, in the quality of the local music fan. Okay, when I stop and think about it, what I've really done is started paying $50+ for all of my local music, but really that's besides the point when you're helping friends, right?

On the other hand, I'm still not convinced about Kickstarter as a fundraising tactic though.  I've always thought it was just better for the artist to sell advance copies of the album on their own.  If you can't sell them, why make them?  Oh sure, you'll sell a few to people that didn't know you before hand, but by and large the biggest percentage of your sales should be to existing fans anyway, right?  Wait, I know you people, and I also know most of you give the friggin' albums away to people you don't know, as well as most of the people you do know.

I should probably do a couple myself, I guess.  Somebody clue me in.  Is anybody trying different crowd-sourcing sites?  Is it all frantic worrying that you won't hit your goal?  I've got lofty goals and I'm convinced I'm the only one who sees the merit in most of these endeavors, plus I'd feel like a virtual panhandler if I fell short.