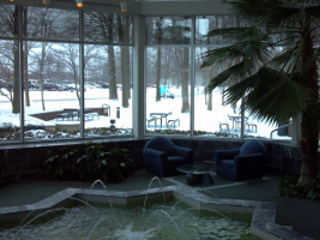 There's 106 pages to write, I got 3 pounds of coffee, 2 packs of cigarettes, there's palm trees... and it's snowing. By the way, I'm afraid some of you are no longer allowed to be friends with me because you stared blankly at that reference.  Marathon typing day at work, hence the short blog post.  Sort of sucks when stuff you do at your job regularly ends up on the news during your morning commute, which really just tells you what your priorities are going to be right before you hit the parking lot.  The deadlines are pretty tight at times but not insurmountable, aside form that intense burning sensation I'm periodically getting in the back of my right hand.  No, I tried, and I can't shoot fire from my fingertips like Pyro or the Human Torch ... well ... YET, anyway.

Pretty big week for music.  A rare acoustic set from The Holland Account at Sabbatical tomorrow.  Really hoping I can catch that, not just because of the uniqueness of the performance, or because it's the last Shine in the Village, but mainly because I FINALLY got to meet Nick Ramey back in September  (supremely cool guy, by the way) and I'd love to get an interview set up with him and the rest of the guys.  Also on tap are two installments of Kolo Bell's open mic night, Landon Keller at Shine on the Rocks Thursday night (another fine fellow I've owed a new interview to for a few years), Tonos Triad at the Copper Still on Friday (missed them last night, sadly), and Mighty Mia's birthday bar crawl on Saturday, in conjunction with the Thomas Wayne Pruitt/NPC/Swig show at Northbound Music Showcase.  Not to play doom and gloom here, but rumor has it this may be it for Swig, which is incredibly disheartening as I watched that band grow from a little "Crimson Cult" to one of the most-respected, under-appreciated bands in the city.  Ironically, that also seems to be one of the problems.  I'll keep everyone posted as I hear more about what' going on in the whiskey jar, as they say.

Finally, I get these a lot, but I finally figured out why this bugs me.  A new country music site just sent me an email.  They've "evaluated" Indy In-Tune and determined I would be a "perfect partner" for a "unique opportunity" to guest blog for their new site, currently in "beta mode."  Of course they can't pay me for my time and research, but certainly I see the value in having my name and works published on such a prestigious, high-profile site as theirs ... blah blah blah ... "We hope you're as excited about this opportunity as we are."  I used to think it was the free part, but obviously copywriters are a dime a dozen.  Then I figured it was the insulting bit about I would be stupid not to share their unbridled enthusiasm for supplying free content to someone else's site.  That's just sales pitch stuff, really doesn't bother me because I know they're probably embarrassed for having to type it.  No, what I realized is that the thing that really pisses me off is the condescending tone of, "Yeah, we're not even live yet, but we're already much more prestigious and high-profile than your seven-year-old site you've put your heart and soul into."  Don't they realize I can make or break musical deals in this town?  I mean, if you wanna play the North side, you gotta clear it with me.  Well ... okay ... north of 139st street ... and west of SR37 ... and east of Allisonville Road ... okay basically Claude and Annie's ... unless Bill really likes your band because you play free ... or you come to Kolo's open mic.  Oh, nevermind.