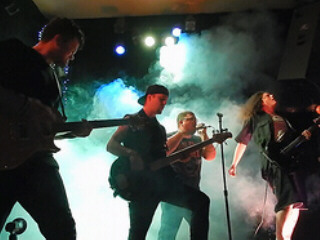 Oh, crap, so you mean it's only, like, one week until Christmas?  Did you ever notice how much easier Christmas shopping was back when you physically bought books, CD's, movies, and the like?  I remember going to Borders, or even better, Media Play and getting all of my shopping done in one fell swoop.  These days, not so many options.  "Here, have a meticulously arranged array of 1's and 0's that I have added to the virtual storage drive on your preferred provider's service."  I'm surprised there isn't a "virtual box" they can unwrap so we don't lose that traditional tactile sensation of getting an actual physical gift.  Of course, if they do that, they ought to have a "virtual paper" app so I don't lose my l33t wrapping skillz and ability to make any flat polygon look like a papier mache boulder with the careful application of colored paper and copious amounts of scotch tape.  (Mmmmmm ... scotch.)

Shine in the village closes out tonight with an acoustic performance by The Holland Account at Sabbatical.  While the series should be considered a success, it is most-likely not going to get picked up for a second series after the holidays.  Add this setback to the recent closing of the Upper Room and it looks like Broad Ripple is once again devoid of any real live music.  There was a time when I would have thought this a crime of epic proportions, but as I advance in years, I'm starting to think it's a shame that Broad Ripple nightclubs don't burn down by themselves.  Though I am ashamed to admit it, there are those times when I really want to stop and have a beer someplace, but I can't find parking within a half mile of the venue and I frankly don't feel like walking, doubly true if it is raining, icy, or just uncomfortably cold.  Top that off with the parking S.S. who literally stood by my car with a ticket ready at 8:55 at night to slap it on my windshield at 8:56 when my meter ran out so he could make sure to cite me during the four minute window between when I paid the meter, and when the spot would have been free.

Now, the biggest problem at my local drinking establishment (Code Name:  "Studio C") is getting pulled over once a a month for taking the back exit out of the parking lot (it's the most direct route to my home, but the cops think I'm dodging them, so they follow me to my driveway and ask where the heck I think I'm going and how much I've drank).  As near as I can tell from my observation points on the deck of Sabbatical or the rail at OPT's (Tangent:  Technically, shouldn't it be OP'sT?) public intox, impaired driving, and apparently even assault and batter are all completely legal in the village.  Probably still not enough to entice me to hang out there once there's no more live music though.