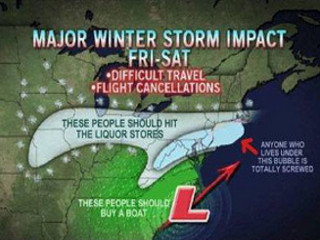 Feels like a Monday.  Still not back up to full strength from the New Year's debacle, though I am finding out about more and more embarrassing stuff I apparently said that I don't remember saying.  It's amusing going back and trying to think, what I must have been trying to say versus what words actually erupted forth from my mouth.  Either way, back at work, and it feels like the second Monday this week.

So it's 2014, right?  You'd think by now we wouldn't be so completely and utterly shocked when weather people actually get a forecast right.  In fact, they still weren't right; they've probably underestimated this one by the same about they overestimated all of the others.  The call was for 3-5, but I've already got over 5 on the ground, and the weather advisory continues for another 12 hours.  Then, apparently, this is the easy bit before the ball-shrinking cold snap hits next week.  I can already tell you my car will freeze up, no doubt leading to unintended repair bills and a few missed events.  Apologies in advance for not showing up to yours.  Not sure what's on the calendar, but I guarantee it will be something really cool that I wanted to go to.

Speaking of really cool shows, I really need to start the booking engine.  I've got a few open slots to push.  Most urgently:  the 2014 season of Monday Night Live kicks off at Claude and Annie's on February 3.  Still have room for one act, will take just about anything, but would prefer an acoustic band.  After that, we've got PodConcert VII at Birdy's on Valentine's night.  This one is a ladies night, formal dress suggested, but not required.  Basically, I wanted to get the Girls of Indy In-Tune up on stage in little black dresses, and so far they've been all about that.  Still need to find two or three more female-fronted groups, so if that's you, get in touch!

So, another silly encounter on the drive in to work this morning.  Many of you will remember, Megan Hopkins from the Orphan Christmas Party regaling with her tale of being poked by John Popper on Facebook, but leaving out the on Facebook part, which as always, lead to a non-contextual tweet of the otherwise random conversation.  As expected, Mr. Popper has a sense of humor about these things as well.  The fact that he apparently answers his own tweets merely lends further credibility to Megan's claim to fame.  It still mildly irritates me now that I've had half-a-dozen celebrities Tweet me based on a mention (not a tag) of their name, but I can't get Jim Irsay to respond with a flippant Fuck off, Snider! to my blatant challenge to sponsor the Indy In-Tune International Rock Exchange idea.

Radio exploration this morning led to a neat new discovery.  Theo Parrish, aka Sound Signature, out of Detroit.  He's putting out some very cool techno/house on the smooth and soulful side but using real instruments and samples.  If you follow an earlier post where I was attempting to find/describe/create this kind of prog/jazz fusion/electronica hybrid, you'll see why I was so excited to discover this.  Will definitely be checking out the rest of his catalog this evening.