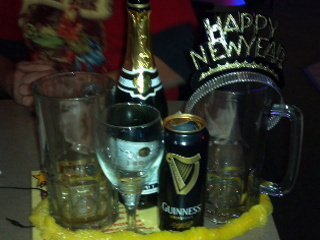 Oh man, somebody tell the guy with the jackhammer to lay off.  Yeah, I wasn't going to get drunk last night, and had made a really good effort at it up until about 12:15 when barkeep extraordinaire asked if I wanted some more champagne.  Hey, the complimentary thimble-full they pour you did go down nicely, and was at least momentarily appeasing me from murdering the drunken idiots with the horns.  To my surprise, he handed me not another plastic thimble, but instead an entire unopened bottle  granted its cheap, rotgut champagne, but still, nice thought.  Within about an hour, shortly after wishing St. Louis a happy new year, I had pretty much polished that bottle off, the second two thirds not being nearly as tasty as the first.  Funny thing, I'm starting to think that nobody really likes champagne, as for years now it's been my job at New Years' parties to go around and polish off all the glasses that some guest took one or two tiny sips out of.   Problem is when the frugal guys like Mr. Smythe purchase the champagne equivalent of Thunderbird or something.  I really don't have the pallette to tell the difference between good stuff and cheap stuff, but the screw cap should have been my first clue, the unending heartburn from hell, my second.  I do remember waking up about every half-hour with severe acid reflux, but I'm not certain if I actually did get up and pop a couple of Tums that many times, or I just dreamed it.

Spent the better part of last night propped up on a barstool chatting on and off with Irish, as he bounced around the room doing his energetic social butterfly thing, and online with Mark Kelly, radio chum over in the UK.  He's very excited about his pending trip to the US later this year, which now includes a stop here in Indy to finally tilt a few pints in person.   Now, I think I've mentioned before that the main problem with friends in England is the five hour time difference.   That mean I'm at work when they're hanging out in the evening; they're already shitfaced drunk when I'm hanging out in the evening; and by the time you're shitfaced drunk, they're just getting up and going to work.  So essentially:  I'm not sure I've had too many conversations with these guys when at least one of us wasn't in their right mind, often both when I go back and look at my chat history.  The point being, at some point in the conversation last night, I see the idea of a charity fundraiser concert involving a bunch of local bands and something to do with Marks connections in the UFC circuit got bandied about.  Not sure how serious that was, or what the actual feasibility is, but I'm always up for a good show.  I put Jack and Brandon on it, so who knows; maybe we'll have a little mini-festival like the one that got aborted last year.  Either way, because I delegated that one away, it's someone else's New Year's resolution now.  Just tell me how many bands you want and where I need to stand to introduce them.a