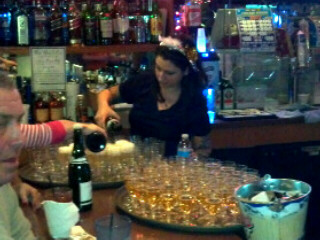 Ah, New Year's Eve.  Seems like a few years ago, this was my favorite holiday since it really didn't involve anything other than having a bunch of friends over and drinking a lot.  These days, it's really just the last annoying holiday to close out the season and seems to reflect on sitting around, drinking by yourself, and reflecting on all those things you planned to get done this year but never quite got around to.  Maybe you'll struggle for a few hours trying to remember what last year's resolution was (write a song a week  record album of the best 24) and what it was that distracted you away from doing it (wasted too much time with forays into music promotion).  You try real hard not to count how many years in a row you've fallen short on your plans, or how many years you likely have left to get it right.  I think the real pisser for New Years for me is, everybody's busy.  Most active bands I know have a gig tonight, so it's back to that issue of having to choose between your friends.  Most of my non-band friends are staying home with the kids this year, which is generally what I would prefer, as I hate driving on amateur night.

No, instead I've schlepped the laptop up here to Claude and Annie's, which is surprisingly empty all things considered.  There's a halfway decent prime rib dinner for $16, a nice comfy bar stool to sit on, free WiFi, and a big-assed beer to drink.  So far I've managed to get two podcasts edited and out the door, and hopefully I can get started on a third real quick once I'm caught up on my blogging.  Now, that's the way to be productive.  If I could only convince the boss at the day job that all of my best work is done in bars.  Man, I miss being self-employed sometimes ( just sometimes).

On the other hand, there is an abundance of mouth-breathing rednecks who act like they've never seen a horn, whistle, or blower (Tangent:  Did you know that's what those curly-cue horns that you blow into and unroll are called? Yeah, I had to look it up.) before with the way they're clamoring over them.  I mean, seriously there's still a couple of hours to go, you don't want to wear it out, do you?   Save some for the ball drop.

I'm playing around with a few New Year's resolutions this year  or at least goals.  Obviously putting the world record longest radio broadcast back in the hands of a rock-and-roll station is a priority (or at least some kind of old-timey traditional radio publicity stunt), as is finishing the remodel work in Studio B and the back office.  I think the international band exchange idea is pretty much dead due to lack of realistic ability to fund/make money from it.  The album project, Infinite Nun's Frothy Deed  is still another dream that I will do someday, although I'm likely getting ready to commit to a new band next week, so there's a good possibility that one will be held for another year yet again.  I suppose we'll just have to wait and see how things shake out in 2014.