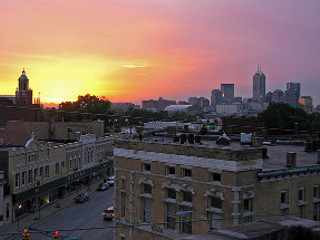 This whole week between Christmas and New Year's thing is really just a complete waste of time, right?  They should probably either just give everyone the week off, or push the holidays closer together.  Pretty much I spent the entire day at work with only about a half-day's worth of work to do, and stymied on most of my project, as everyone I am waiting on information/product from just happens to be taking vacation this week.
I did get some new functionality added to indyintune.com over the weekend.  You will note that the photo album is at least functional at the moment.  You'll note it's a bit slow in places, mostly owing to the fact that it's making a ton of web-service calls back to Flickr, where the photos are actually stored.  I'll get around to optimizing it for speed later, but in the meantime I did want to make sure that nearly eight years' worth of photos were available for viewing in a format that's easier to navigate than Facebook, because let's face it, Facebook being Facebook, their photo sharing capabilities could use a bit of improvement.

So tomorrow is New Years' eve, my former favorite holiday of the year.  I haven't decided if I even want to bother going out this year, or just stay home, enjoy the day off, and try to get ahead on some projects.  If I do go out, it will definitely be to the Circle City Rebirth bash at Birdy's featuring Minute Details, Indien, Kaleidostars, and DJ Diablo.  However, as I have this tendency to regularly get pulled over and sobriety checked driving two blocks to the gas station on my corner to buy a pack of smokes and a gallon of milk at 2:30 AM, I'm probably pushing my luck getting in a car on amateur night, when I actually would be drinking.

I must admit, I've yet to see Kaleidostars live, really through nobody's fault but mine, especially since I am very much an outspoken critic of the dual music scene we seem to have in Indianapolis, which consists of Fountain Square Bands (where I would squarely put Kaleidostars) and Everyone else.  Every band, it seems, has their little zone geographically, and whether it's unreliable transportation, uncomfortable surroundings, or just level of effort that keeps them in it, I have no idea.  I've merely noted that you will often see a south side band play Birdy's or 8 Seconds out west, and I've gotten several to come all the way up to Fishers and Zionsville for a Monday Night Live show.  Conversely, I know a lot of north side bands that would occasionally hit the Rock House, Lizards, or Visions.  Getting a Fountain Square Band out of Fountain Square, even for a podcast or radio show, takes something on the order of blasting powder and a crowbar  or at least something a bit stronger that what I've got, because I've never been able to make it happen.

On the other hand, why would anyone want to leave Fountain Square?  They've got some of the best venues, several great bands, awesome food, and an almost total monopoly on media coverage.  In fact, I'd say they have everything except for adequate parking and a Jazz joint.