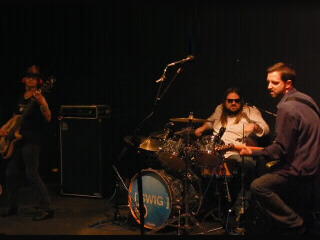 So, I really didn't take time yesterday to sufficiently praise the band Swig (Show #138) for a fantastic set last Saturday night, and to state for the record, how thoroughly disappointed I will be if it does, indeed, turn out to be their final show.  (Officially, it's being called take some time away, but obviously I have an inside scoop here, and it doesn't sound promising to me.)  Swig, or at least Leigh and Brian frequented Kolo Bell's Wednesday night open stage.  I had known Brian previously as a member of Extra Blue Kind, who were guests on Show #003.  Coincidentally enough, it was also Brian's last gig with the band, though apparently he was the only one not aware of that at the time, which made the interview very awkward in retrospect.  Originally Swig were known as Crimson Cult, and I assumed changed names owing to the popularity of the metal band by the same name.  They later renamed themselves and added the superlative, world-famous (and Indy In-Tune sponsor) Jamie Jackson in the drum slot, and set the town abuzz.  I was fortunate enough to book them for one of their first (if not THE first) gigs as a three-piece at PodConcert II.  That night I had an interesting conversation with bassist Leigh Marino.  Actually, ALL conversations you have with Leigh are interesting, but this one particularly stuck out.

Leigh was very keen to point out that while Indianapolis, being a central hub for travelling bands in the Midwest, has an incredible hodgepodge of styles playing around in its scene.  Unfortunately, while there is Chicago Blues, St. Louis Jazz, Detroit's Motown, and the blue-collar rock of Celeveland, there really isn't a distinct musical style that Indianapolis can lay claim to.  She herself suggested that Swig was attempting to invent that style, which she was calling Indie Blues, as it is a hodgepodge of the minimalistic indie pop sound, but obviously based around delta blues.  I then suggested it should be Indy Blues, since to my knowledge that sound didn't really exist anywhere else and one could just as easily say it's the blending of the clean electric tones of Chicago blues, the swampier vocals and guitar of southern rock, the solid backbeat of heartland rock, etc.  This led into a long debate about the philosophy of the band, the influences, etc.  As I said, great conversation.

Basically, I think the beauty of Swig was that, in their music, you could hear whatever you wanted to hear.  I think I eventually came around to Leigh's indie pop meets blues perspective.  Certainly I don't hear Willie Nelson and John Mellencamp echoing in it the way I did at first, though getting to hear the first album -- presumably the definitive word on what the band is supposed to sound like -- will quickly change your perspective on their music, and possibly life in general.  Certainly it was one of the best albums of 2013, and among my favorite local releases to date. If Saturday was indeed their last public show, then at least they went out on a high note, and certainly possessed as much energy and drive as I had ever seen them play with.  Truly, they will be missed.