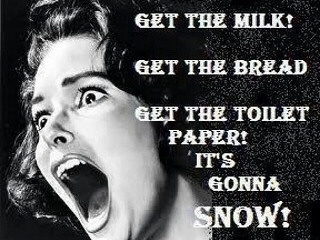 I've decided that I'm going to die in this weather event. I've flat out refused to buy eggs. I've never understood the irrational French Toast theory. If we're going to lose power and freeze to death, I fail to see how eggs will keep me alive. Without electricity, it's going to be damned hard to cook them, and I'm certainly not going to eat them raw. Bread, I understand, has many uses; milk, well I suppose you could put it outside if it threatens to get warm and spoil. I've got a half-gallon on standby for Lil' Q, though otherwise I probably wouldn't bother since it contains neither caffeine nor alcohol. I'm sure the lack of eggs will somehow come back and haunt me. Personally my plan for surviving is to either eat my neighbors, or live off of the two dozen frozen pizzas in my freezer, which I assume I'll be baking with the aid of a cigarette lighter.

Reports are flying in that grocery stores are emptied out already, which is making people panic. I went to the gas station only to find out they were out of gas, likely until Monday due to impassible roads. They did however have plenty of milk and bread. More-amusing to me was that I accidentally tweeting this on the Indy In-Tune account instead of my personal account. Next thing I know, I've got half a dozen people and buzz services asking me if that was actually true. By the time I left the bar a couple hours later, Fox 59 news was doing a live remote from that gas station. I was thinking of tweeting something about how Indy In-Tune News had beat them to the scoop, but figured someone might blow THAT out of proportion as well. Well, it is Fox News after all. Next thing you know, I've got Donald Trump offering a bounty for a copy of my birth certificate and challenging that I am unfit to run Indy In-Tune because I'm not actually FROM Indianapolis, per-se.

So, anyway, couple of lovely games today from our local sports teams. I don't normally get overly-excited about basketball, and football is merely a temporary baseball-substitute as far as I'm concerned, but playoffs are playoffs and that KC game was really awesome. Was actually getting ready to see NPC and Sugar Moon Rabbit, but oddly enough when I hit the restroom prior to leaving, I ripped out the zipper on my pants  terribly embarrassing when you're at a crowded bar. You have to make that call where you try to re-assemble the zipper yourself  hoping that nobody walks in on your and sees you feverishly staring and filling with your crotchal area  or just go out and find ways to cover your netherlands with menus, napkins, or other people if possible. Fortunately, I was wearing a long-ish sweater and could make it back to my laptop bag without anyone noticing. By the time I got home to change pants, I noted that my cell phone was living on borrowed battery time. As the cigarette lighter in my car has suddenly ceased working, and with Snowpocalypse only 300 minutes away, I decided it was probably in my best interest to give music a break for the night and spend the evening blogging, writing, drinking tea, and just generally being bored with life.

So now, with you being enriched, I'm off to stare out the window watching for flakes. Stay warm, friends.