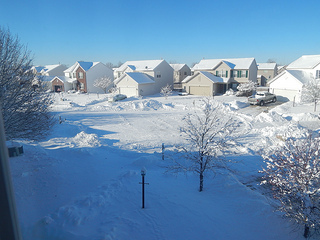 Snowpocalypse: Day 2. Well, okay, it was a few hours late arriving, but at least it turned out to be everything we were promised so far.  I managed to shovel the drive twice, and really should have gotten out for a third pass, just to keep the HOA bastards who think the world will come to an end if the sidewalk in front of my house (on a cul-de-sac) isn't sufficiently shoveled and de-iced. Problem being, my back didn't exactly weather the second outing all that well, so I spend the rest of the day trying to pop it back into a straight line.  At the moment, the temperature is crashing and the wind is picking up, so I'm hoping it'll just do my job for me.

Now, I know looking at the thermostat on my wall that it's a modest 68 degrees in here, which is the same 68 that I keep it set for every night.  Tonight just feels friggin' cold to me though.  Nothing to be done for it.  I've thrown on a second sweatshirt, I've kept my shoes on, but somehow I just can't get the psychological cold out of my head.  May have to do something drastic like hit the exercise bike in order to generate some sweat.  (Just kidding.)

I've decided that I'm starting to become my grandfather.  Well, to be more precise, I'm becoming someone else's grandfather, neither of mine were actually like this, but I found myself yelling at the TV weatherman earlier who referenced the 35th anniversary of the Blizzard of '78 in comparison to this storm.  What do YOU know about the Blizzard of '78!?  You weren't even ALIVE then!  I survived it, ya little whippersnapper!  Which is true, and this Snowpocalypse is not even a close comparison.  In '78 I remember missing weeks of school and still going out and playing in snow drifts that were easily three times higher than I was.  We had an intricate series of snow tunnels that led to our friend's houses that we rode our sleds through.  Some even had fake walls and secret rooms added in order to ambush each other.  In retrospect, it was probably not the safest thing, but remember we also used to play Captain America every 4th of July, which largely revolved around holding a trash can lid like a shield while the rest of the kids shot bottle rockets at you.  As far as I know, we all survived with the correct number of fingers and eyeballs.  Point being, the weatherman doesn't know what he's talking about.  They could have at least put Nicole Misencik back on.  I'll let her tell me all about the Blizzard of '78, and not only is she too young to remember it, she's from Arizona, where the weather report is the same every day.  Okay, she did do a stint in Michigan as both a reporter and a weather anchor ( which, probably just turned this from a wry blog post into a creepy I'm making a weathergirl skin suit in my basement kind of admission, so we'll bug out now while we can )

The lights are starting to flicker.  Start shoveling kids, we're in for a long night.