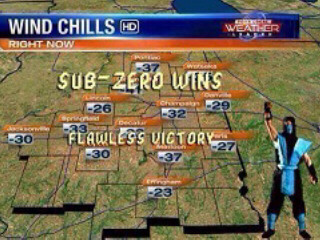 Snowpocalypse: Day 3. Survived the night.  Lights flickered a couple of times, but no power failures forcing me to flee to a posh hotel jacuzzi or anything.  Water still works, no sign of forzen pipes yet.  I'm a bit disappointed about all this, actually.  At least one friend had to hole up in a hotel, eat room service, and take advantage of a bar and pool area.  Thus, for me, there's only one solution for a day like this, and that's to brew up a big pot of coffee, put on a Caribbean radio station, and fire up a crock pot with some rib-sticking goodness that will stink up the house.  Fuck you, polar vortex!  Really you're like a drunken party crasher that won't go away.

So the thought is, later this evening we go live (assuming the sump hasn't frozen and Studio B isn't under water) and do a snowpocalypse call-in show.  I figure I've got a captive audience of stir-crazy shut-ins just looking for adult conversation, it should be pretty popular.  Or maybe it's just me.  Everyone on Facebook seems to be enjoying getting caught up on their reading these days, or even more perversely, enjoying shovelling  which for the record I've done twice, but there's no way I'm getting out in -20 degree weather.  I took one peek out the back door to make sure the sump discharge , the blast of wind brought tears to my eyes, and they instantly froze.  So really, fuck shovelling or any outdoor activity today.

I've been taking advantage of the home-time (I'm still expected to work, so it's not all fun and games) by running through some album suggestions.  Everyone seems to be raging about these Arctic Monkeys lately, which was okay.  I still resist the urge to latch on to anything that is mainstream or popular, Daft Punk being the exception.  Let's face it, those guys were due, had an absolutely fantastic marketing campaign behind that album, and seeing Nile Rogers back in action made for a really fun time.  I know many roll their eyes at me for that, but I'll give props where it's due.  The rest is all subjective anyway, and I'm a child of the 70's in many respects.  Locally, I've really been checking out Simple Ghost lately, after the supremely awesome Jamie Jackon introduced them to me at the Orphan's Christmas party.  Will definitely be trying to get them in rotation and in for a podcast at the next available opportunity.

Waiting to see how the weather shakes out for the weekend, making plans to catch at least one show.  It's actually been weeks owing to a very unreliable mode of transportation,  and even less-reliable weather.  So far Steve Boller at the Sanctuary seems to be the big hot ticket for the weekend.  If you haven't been up to John Gilmore's new concept venue up in Noblesville you owe it to yourself to make the trip.  Yes, I know a good chunk of you aren't willing to travel north of 96th street, but finally we have a venue/listening room that caters to serious fans of the music, and largely does away with the drunken revelry.  If nothing else, he's put his heart, soul, blood, and sweat into this venue and you know I've got a soft spot for good people simple dreams like that.