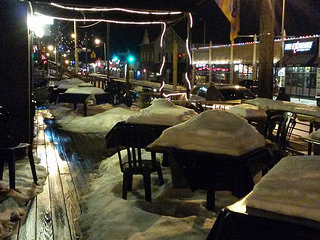 Okay, so my OCD only allows me to get out of bed when the time is evenly divisible by ten. My alarm clock snoozes in increments of seven minutes. I require a MINIMUM of three snoozes on mornings after I go see live music and one additional snooze for every drink after the fifth one. It takes 16 minutes to get to work. If I leave after 8, it only takes 12. I require an additional 6 minutes to buy coffee, cigarettes, and flirt with the cute cashier at the gas station, except on Thursdays when she doesn't work and it only takes me 3. Assuming it is less than 30 minutes from bed to car, what time should I have set my alarm for in order to make an 8:30 meeting?

Bonus question: Am I still going to die alone and friendless?

Went to Kolo Bell's Tuesday open mic last night at Sabbatical ... not to be confused with his Wednesday open mic at Claude and Annie's.  Kolo is, without a doubt, a master at running open mics, as Brandon has blogged before.  With the Tuesday Night open mic, however, he's taking an interesting angle:  The first hour is  dedicated showcase 2-3 musicians who are recorded playing their own original music. He then submits the recordings to us here at Indy In-Tune for consideration in adding them to the rotation -- thus ensuring that we always have a constant supply of fresh, new music from new artists to share with you.  In addition to that, Kolo hit me last night with the idea of doing a weekly radio show and quarterly live performance dedicated to spotlighting the best of this up-and-coming talent.

We've said it before, but it definitely bears repeating, if you are an up-and-coming artist, you owe it to yourself to check out and get involved with whatever Kolo Bell is putting together, wherever he's putting it together.  Honestly, there is probably not a better champion for the fledgling new artist in this city, and the list of people he's nurtured has some pretty impressive names on it.

That said, heard some great stuff last night from newcomer Richard Caudle, plus the cast of regulars we've all come to know and love -- Mike Myers, Jack Barkley, Brian Haan, Mannish Boy Tone, and Mark "The Arrogant Bastard."  Of course this was in between running outside without a coat on, because I could!  I'm thinking this was the first night above the freezing mark in three months, right?  Seemed positively balmy.  Now, normally I'm not a big outdoors guy, and I do normally enjoy winter much more than summer, but I've come to the realization that, more than anything, there are two things I'm missing:  The first is outdoor dining, particularly at Sabbatical, but I'd settle for a beer on the rail at OPT's watching pretty people and drunken idiots pass by.  The second: the sound of a baseball game.  I don't care if I'm watching it, or who it playing, but I love the din of the crowd, the crack of a bat, and organ music.  So I'm audio-centric ... sue me.